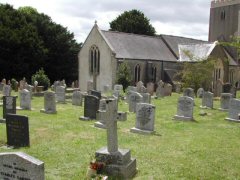 We first met on 6th April, 2002 to discuss how we should go about recording the gravestones in Denbury Churchyard.  The graveyard surrounds the church on 3 sides.  To make it easier to record the large area involved we divided the graveyard into several sections:

We started on the north side of the church and worked from the Lych Gate, towards the east.  Each grave or obvious sign of a burial was given a number.  We used letters for Cremations.

When we began the process of recording, we only included the names and dates, but then we realised other information on the gravestone was also very interesting and useful for family historians.  So we decided to record everything that we could read on each grave.  We also listed all the Monumental Inscriptions inside the Church, giving them numbers with the prefix letter C.

Then there followed a lengthy process of checking and referring to other lists already compiled.  To help visitors, to the graveyard, to locate a particular grave, we also produced an overall plan of the graveyard, showing how it was divided into sections.  Each section then had a detailed plan with numbers and names shown.